The best type of front door to have for security, minus the type of construction, is windowless. A windowless door does not give an intruder the possibility to break the window in the door to gain access. But what if you want to see who is knocking at your door? You get a peephole camera like the Brinno Peephole Security Camera.

The peephole camera also would be good for people whose doorbell camera has been stolen or for those worried about getting a doorbell camera because it could get stolen. The Brinno SHC1000 goes on the inside of the door, where it is not accessible to someone who would want to steal it.

The biggest benefit of a peephole door camera is you don’t have to be right up against the door to see who is there. The screen on this camera is 2.7″ wide, big enough for you to stand back a few feet from the door and still make out who is there.

When you’re looking through a traditional peephole you create a shadow that can be seen from outside. An intruder would find this a perfect time to bust in the door, dazing or hurting you in the process, or shooting through the door intending you harm. Unfortunately that does happen.

This peephole security camera is wireless so the installation is pretty easy. It’s a standard size so there shouldn’t be any issues installing it. If there is not an existing peephole all that is needed is a hole drilled with a bit that is a fraction bigger than the diameter of the peephole barrel. That is all the DIY you need to do.

The video is very clear and sharp which is surprising. The cheap feel of the plastic housing might lead you to believe the video image would be poor. Back lit images are difficult to see clearly but that is a problem with most doorbell and peephole cameras. You can view the screen in real time and see who is at your door from a safe distance.

The images and video cannot be viewed on your phone or computer. Video records to an SD card (up to 32GB) and when you’re ready you can cycle through the images that are stamped with date and time.

You will not get an alert from the Brinno camera when the sensors are tripped and the camera begins recording. This will require you to manually review any footage on the SD card to see if you were visited. But that is a minor inconvenience as it shouldn’t take long to review if there was only one or no visitors.

The camera will let you create a still image from video. And, like all SD cards, you can remove it from the camera and access the video on your computer.

The Brinno SHC1000 comes with a door knocker that can be used with the included peephole but the door knocker is not necessary to be able to install the peephole.

This unit does come with a motion sensor that can either be installed inside the door knocker or, for those

that don’t want to use the door knocker, the motion sensor can be placed near the peephole camera. The manufacturer says it works within 32 feet but I would recommend placing it as close as possible allowing the sensor to properly trigger.

There is also a vibration sensor within the camera that will trigger the camera to record when someone knocks. This sensor will sometimes fail if the vibration is not strong enough. The camera does have a sensitivity setting for this sensor but if you set it to be too light it might activate too much leaving you with a lot of video and low battery. You will need to adjust the sensitivity to get it right for your use. 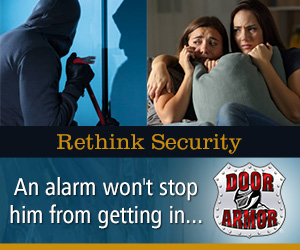